Blogging is good. Blogging about cute not-so-small puppies is even better.

Today, I've decided to take a break from my "Location Spotlight" series and talk about some stuff that's not-quite-photography subject matter. Mainly, my dogue (yes, that's how I pronounce the word "dog" when referring to him). Since the kids are getting older, Amy and I figured that a Golden Retriever puppy would be just the thing to make us go squee with big anime eyes. If you've seen the Pixar movie "Up," then you know where the name "Dug" came from. Hint: SQUIRREL. And if you haven't seen the movie, you've saved yourself from a lot of emotion and tears. Disney and Pixar sure to know how to make a grown adult cry.

Anyway, this is Dug at about eight weeks old. 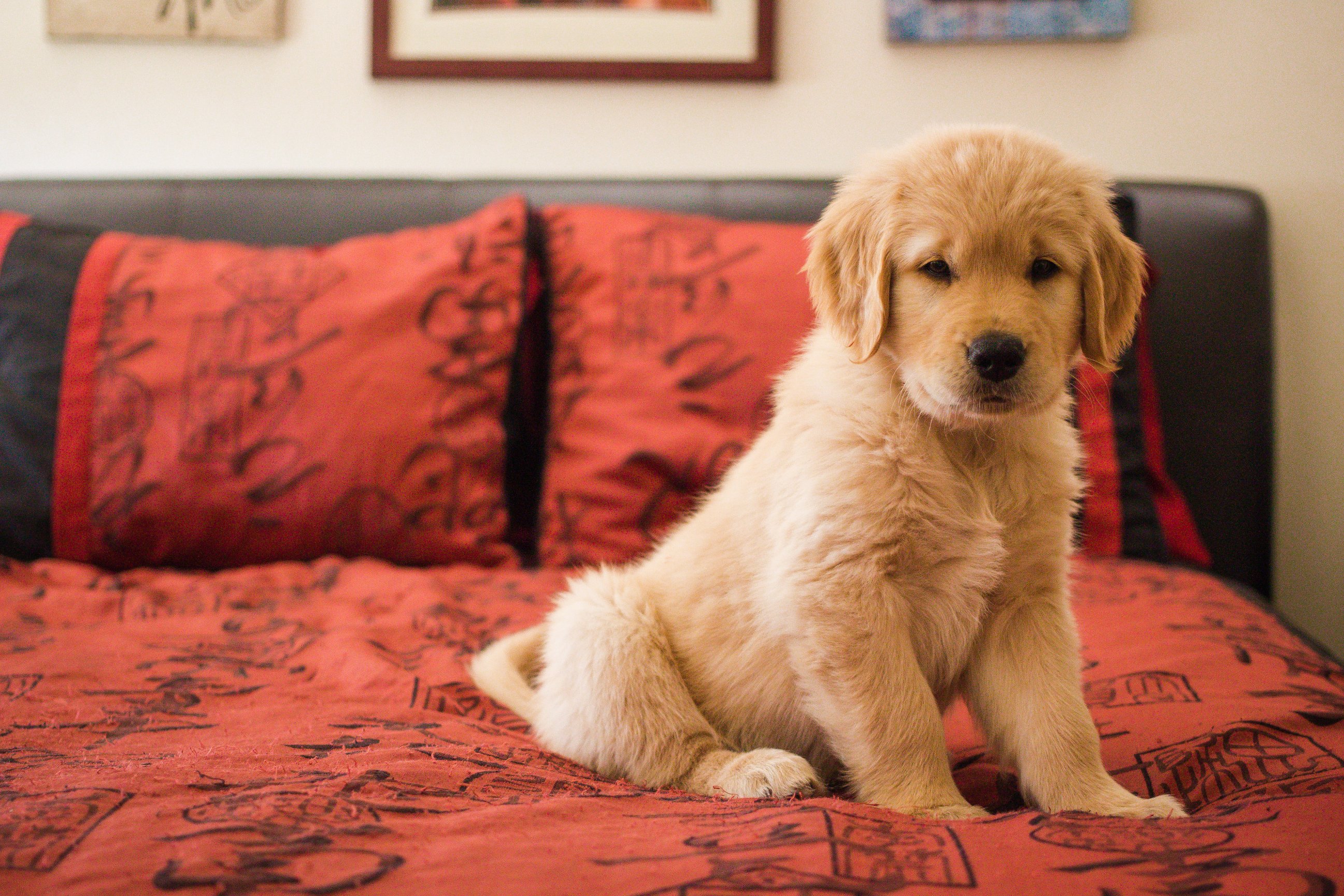 At the time, he had a reasonably shaped head. It was round, it was fluffy, and it had no resemblance to a butt whatsoever. This is our butthead today, defiantly laying in my spot. 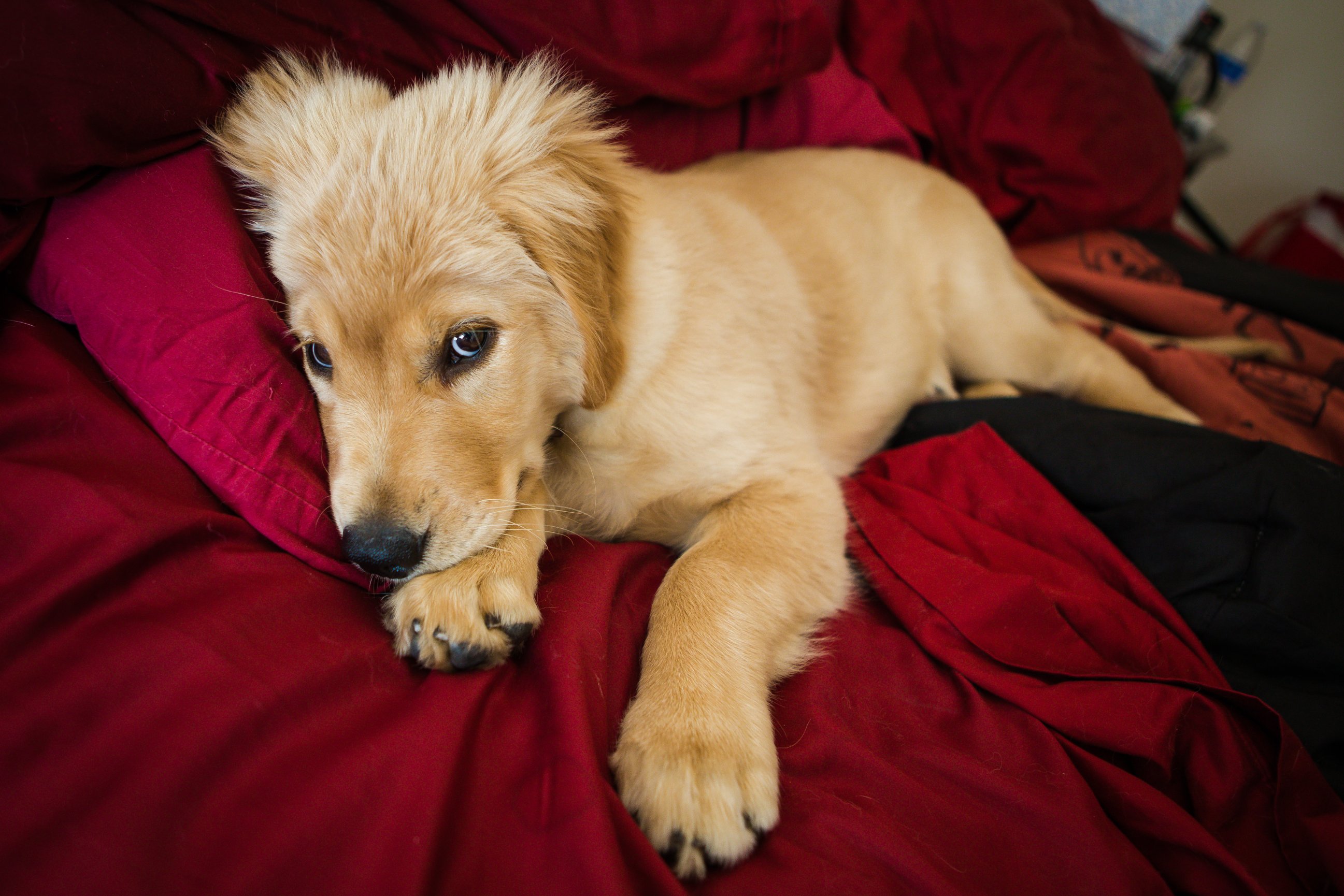 For whatever reason the lord of humor decided to rearrange the fluffiness of his head to resemble a butt (maybe because he's such a butthead for chewing everything in sight), it makes us laugh, even when he's in trouble.

When we picked him up, we had taken a trip as a family to Denver, CO under the guise of recreation and taking time to unwind. Which we did. We went to the museum, to a local brewhouse, and to an amazing Irish festival on Saturday. That Sunday, as we headed out of town, we stopped and picked up our new fur baby from among the litter of his brothers and sisters. The breeder was awesome enough to send us videos and photos via cell phone so we could watch him grow even before we got him. We knew this was our little Dug Dogue. 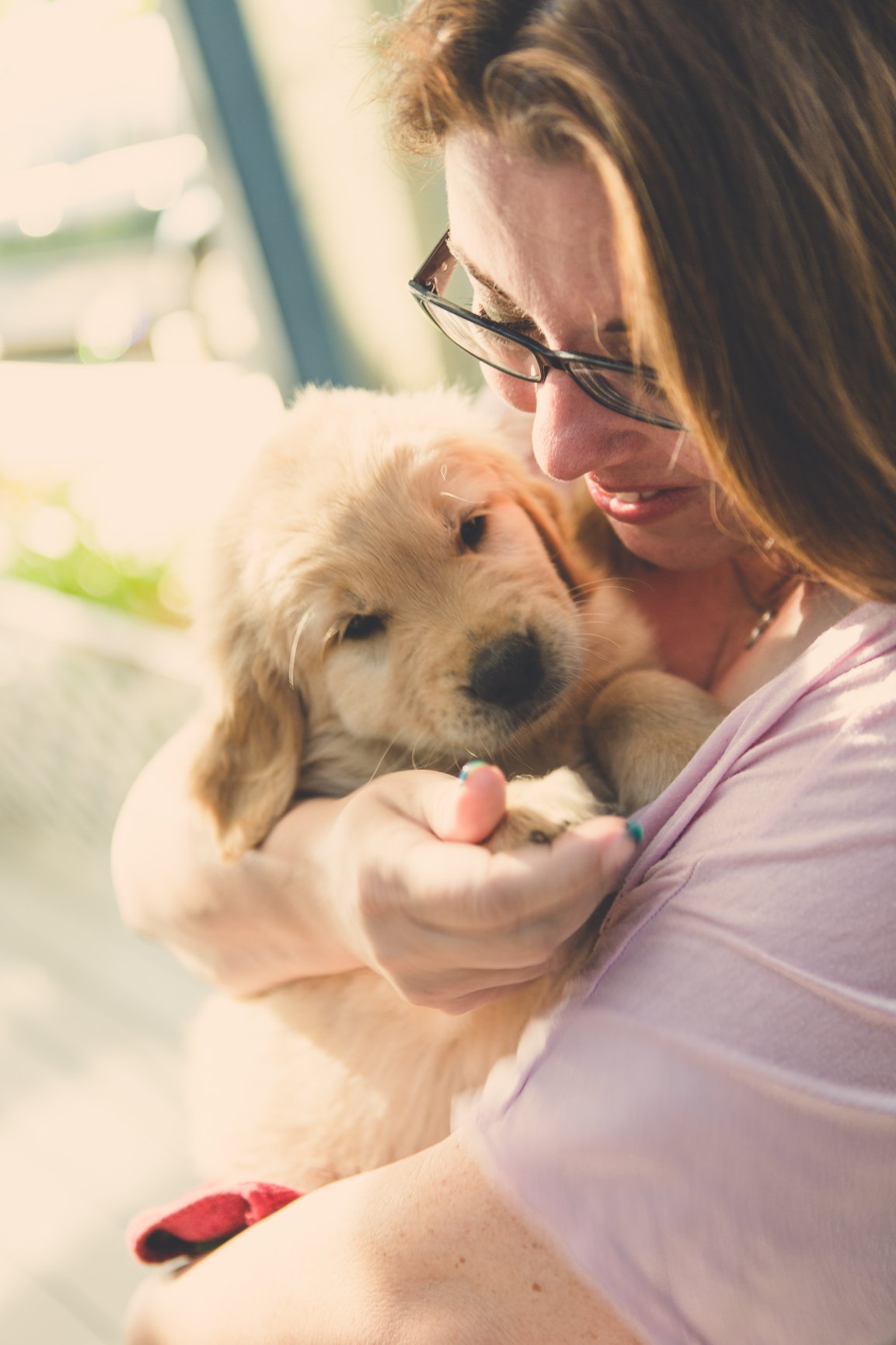 We've had fun taking him to the Bosque where he could flip out as much as he wanted at all the horse poop and nature all around him. He was still a little guy, and Emma could still carry this little fatso around with her. 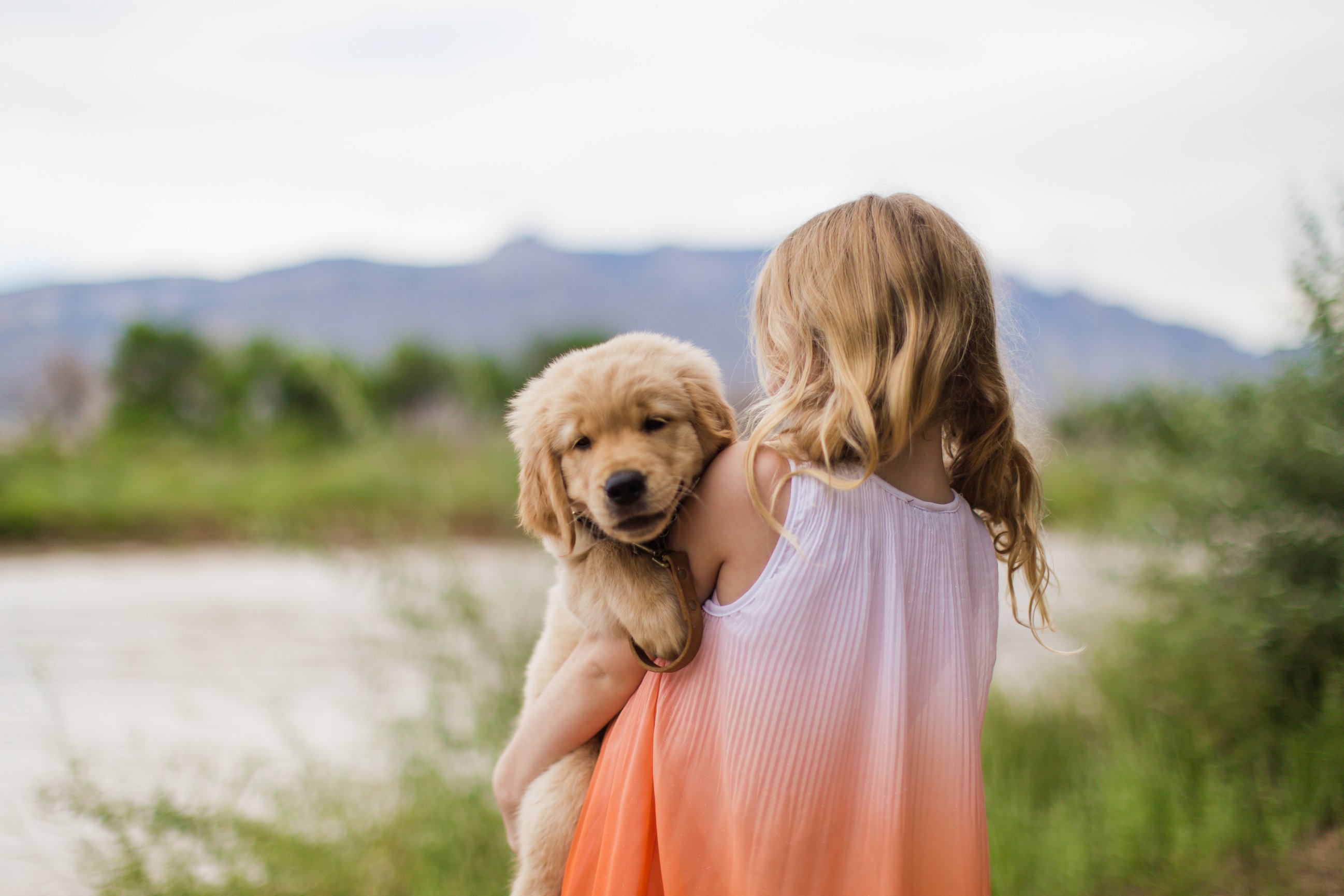 Our best moment with him, so far, happened about three weeks or so ago. Amy had taken the day off from work and we had a day date without the kids, who had started school that week (pictured below for their first day of school, saying goodbye to fatso). 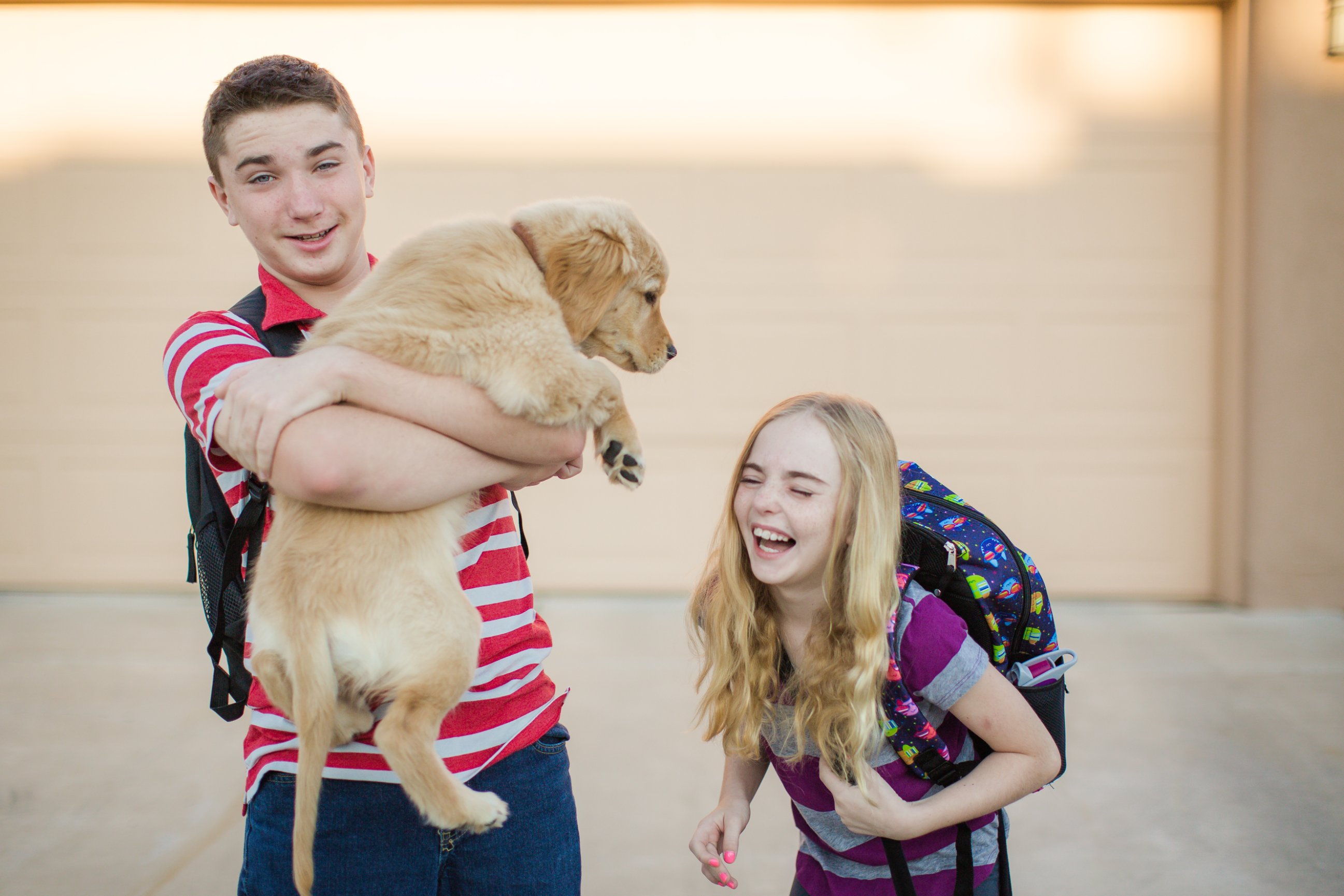 Prior to the official start of the day date, we had taken Dug down to the Bosque. It's our understanding that Golden Retrievers are water dogs. I had no idea what that meant until this happened. 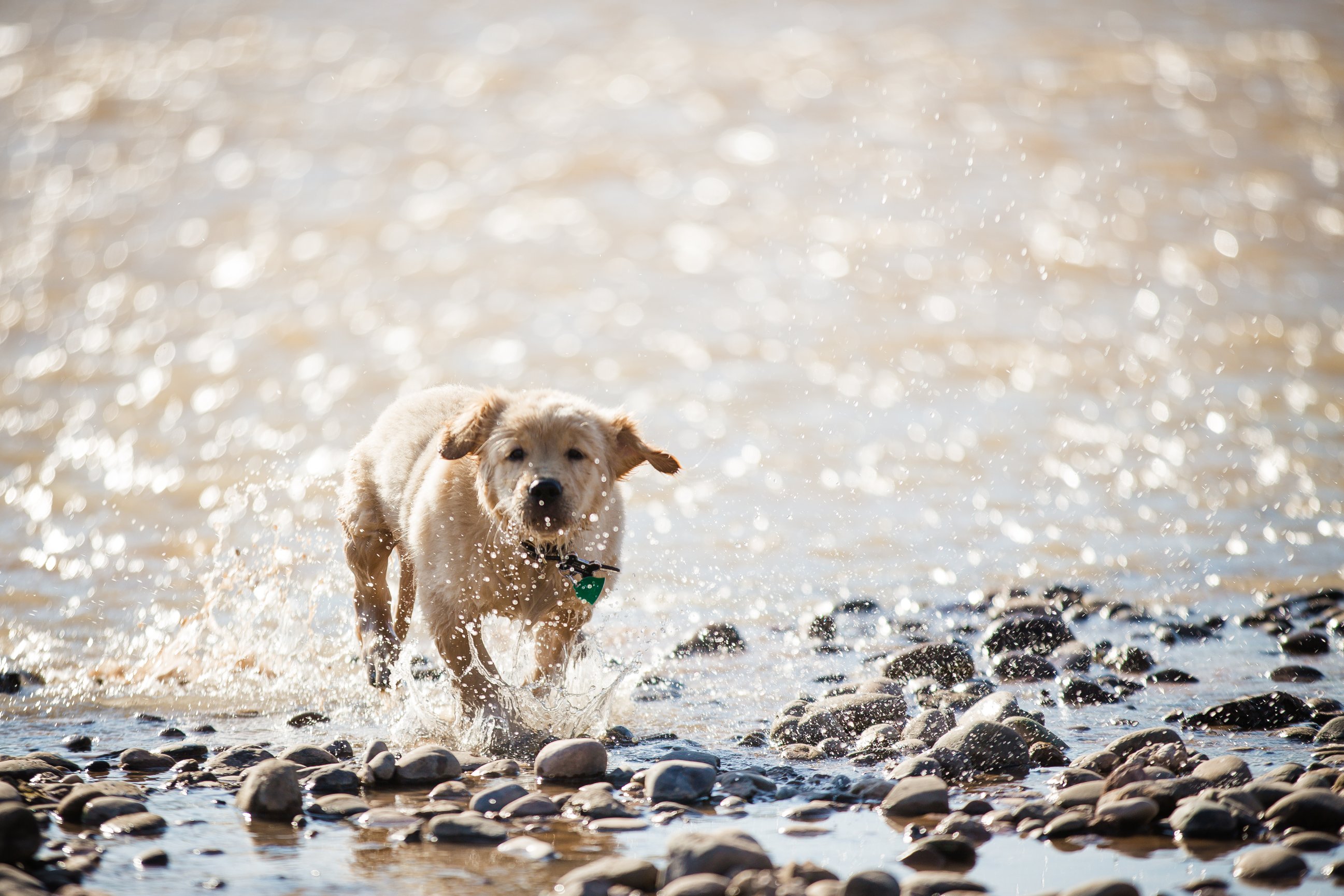 That's right. He lost his mind the second I took him off the leash. It was easily one of the best things I've seen in my life. Pure, unbridled joy.

I've been thankful for the opportunity to have a very flexible schedule where I can train him while everyone is out. He goes with me when I take Sam to zero-hour at school early in the morning, and I walk Emma to the bus stop with Dug in tow, hoping for this outcome when we both get home from our little morning ritual. 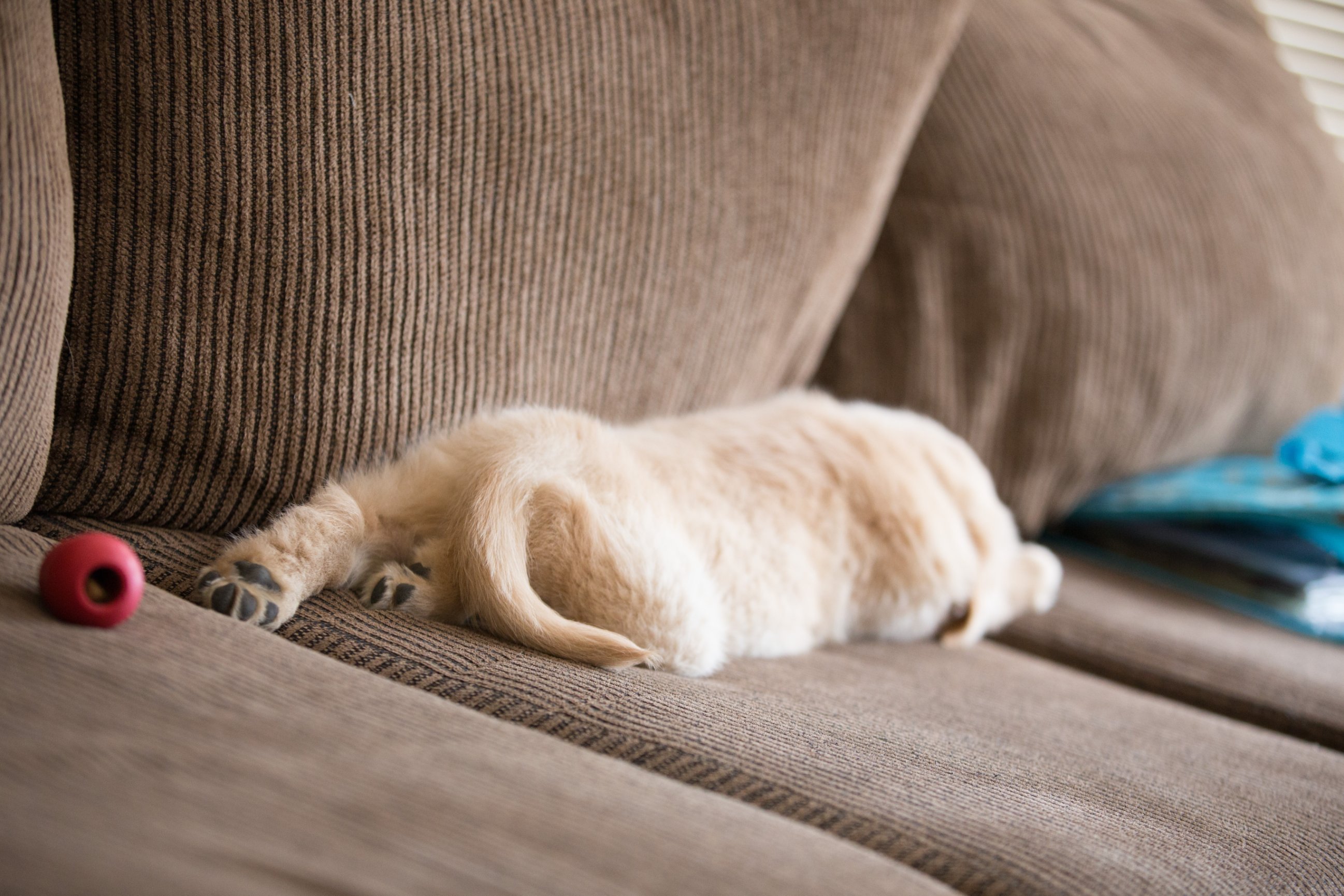 Another thing about this guy... he sure loves his momma (heavy panting). 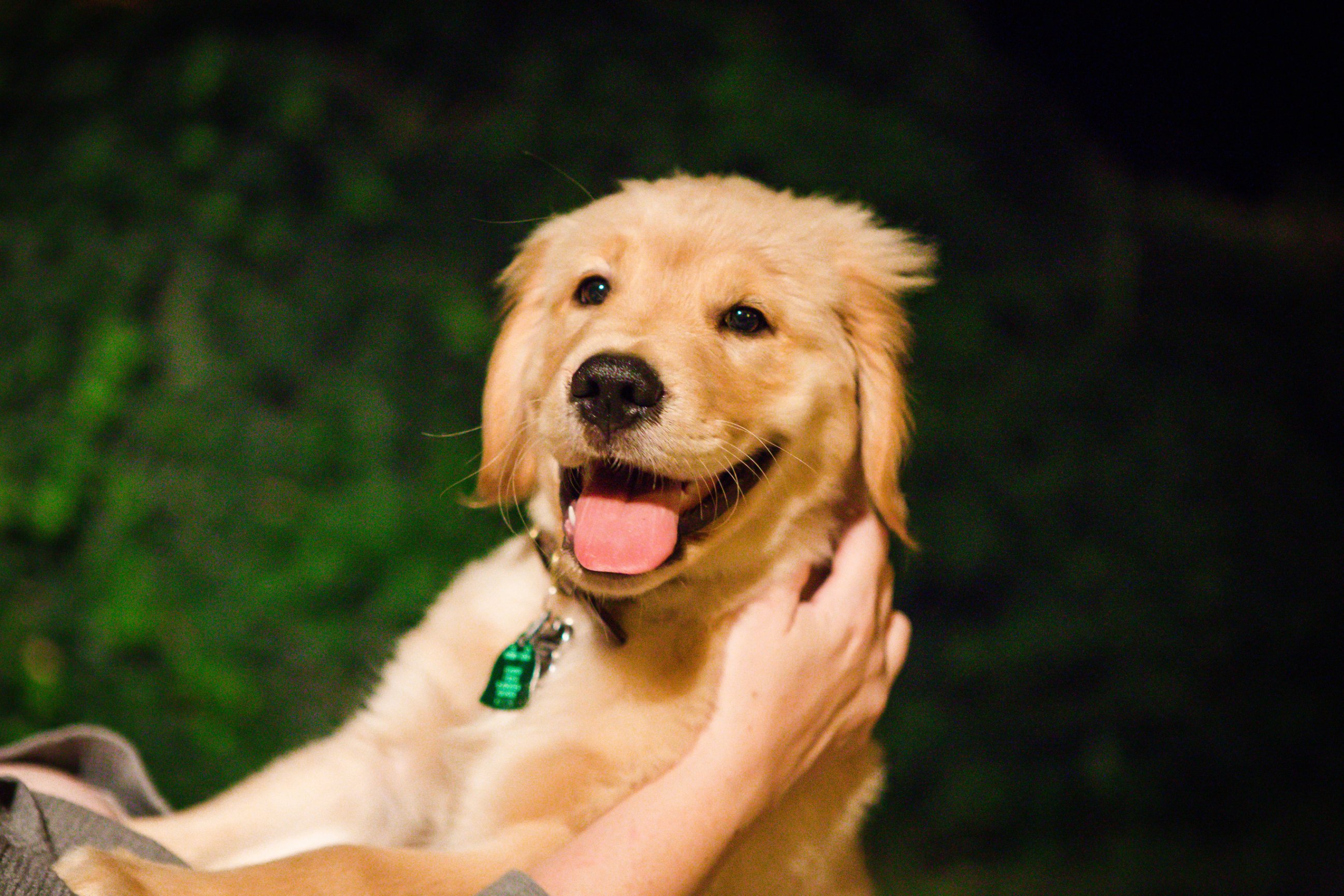 Even though she gives him the baths (which he doesn't seem to mind so much)... 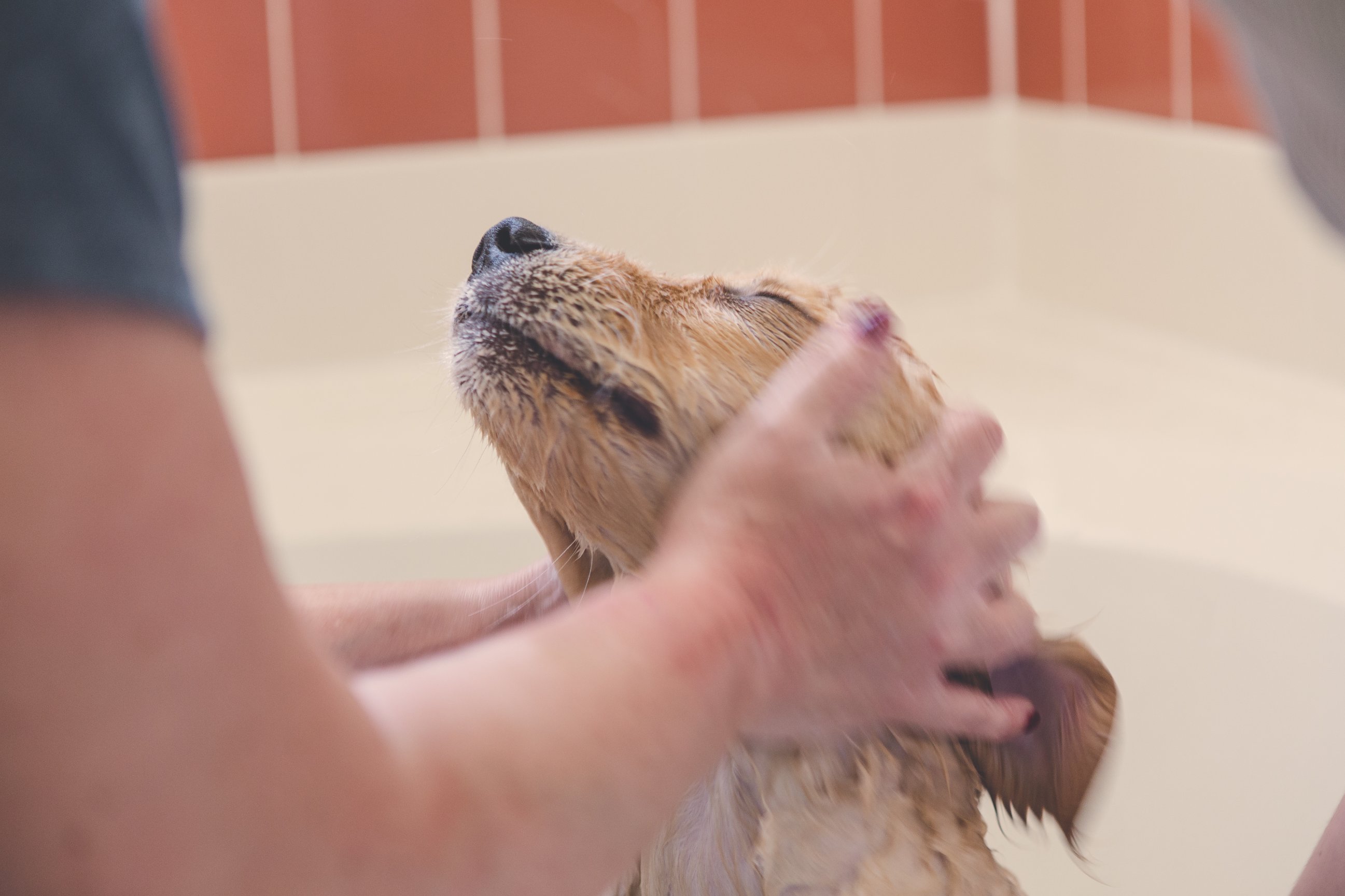 ...and even though he often finds a way to take her favorite pair of Crocs she got from Disney World and "plays" with them... 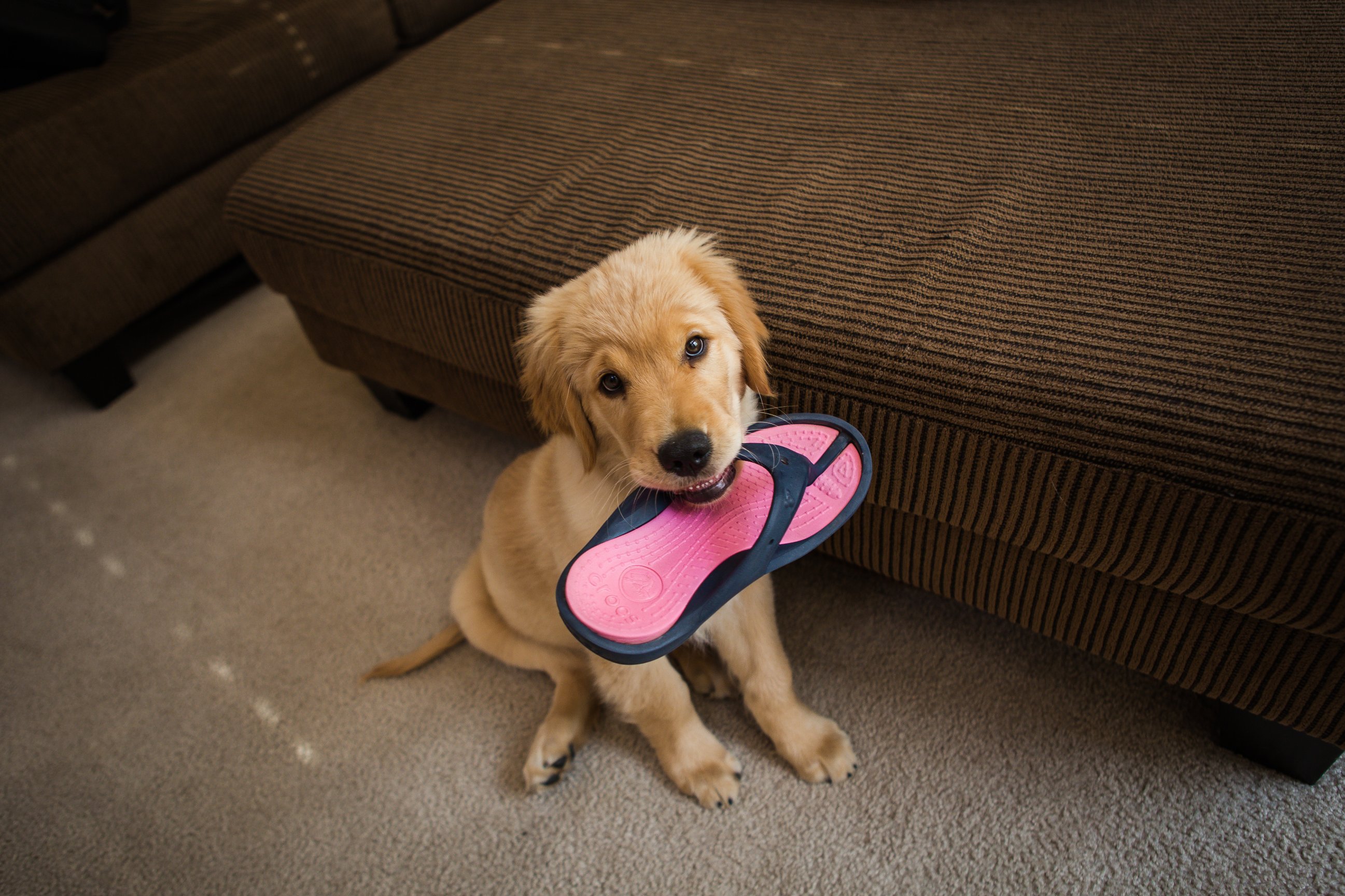 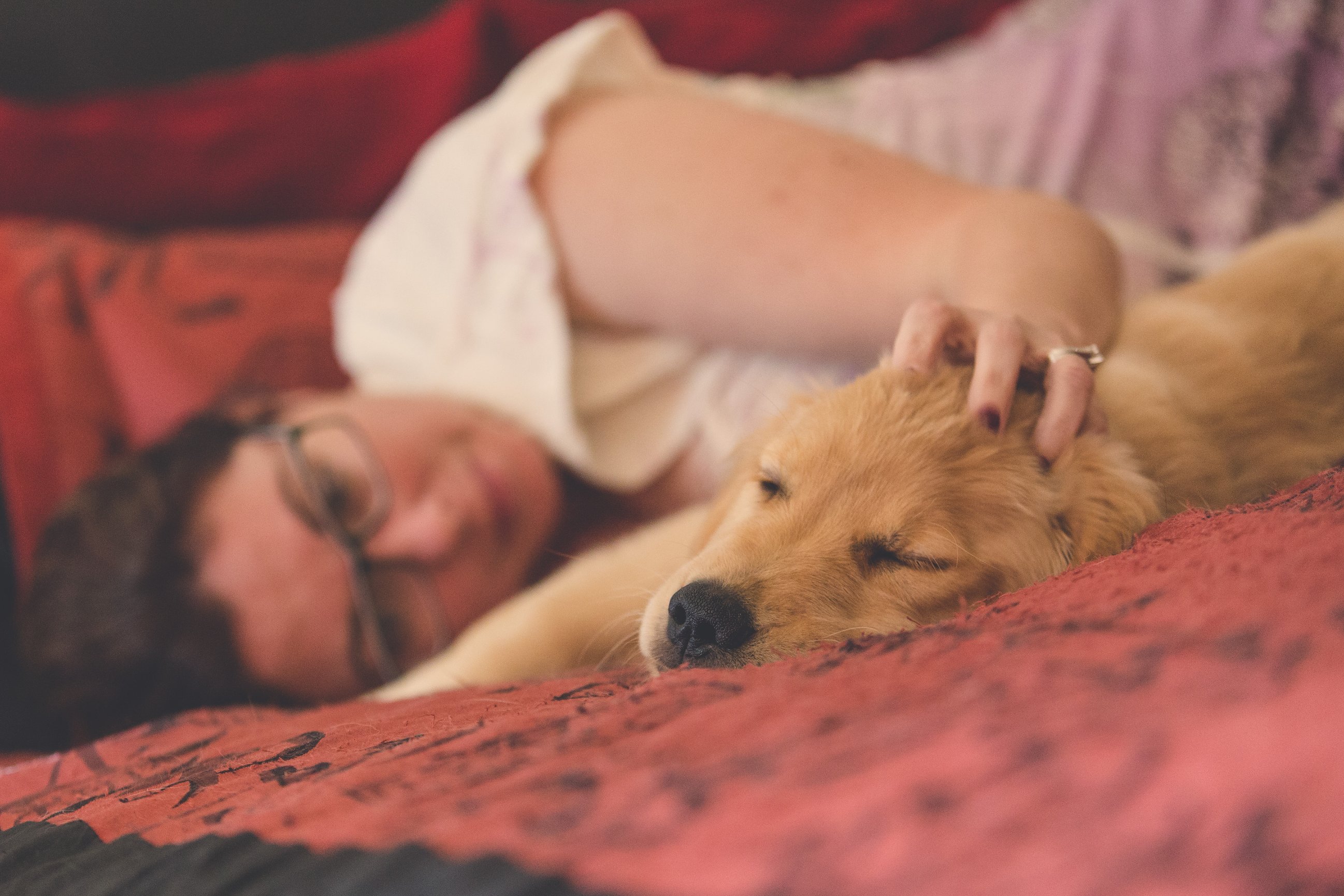 Twokittehs don't seem to care for him much, though. Not yet, at least. 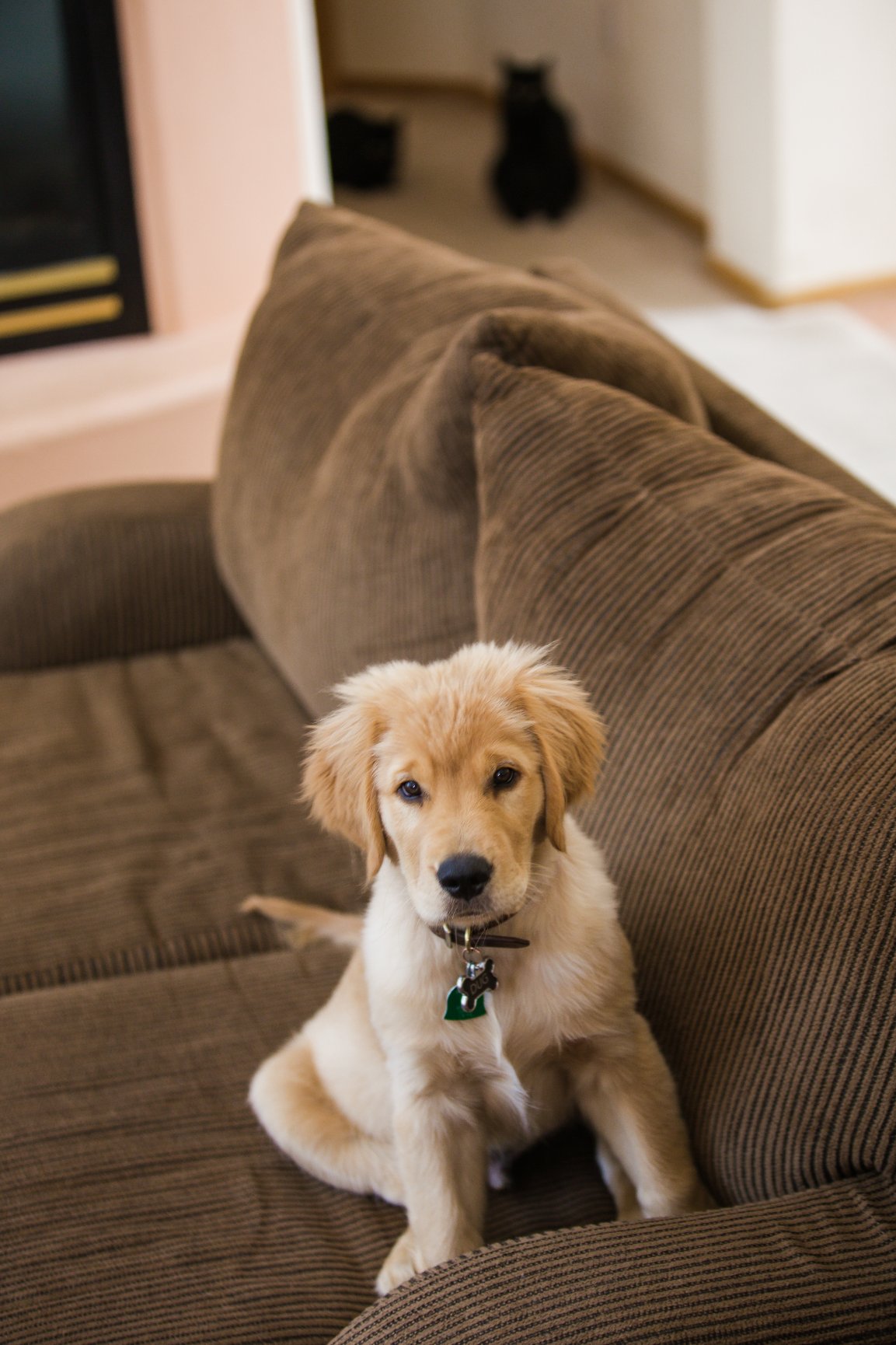 Nichi gets especially jealous when Dug takes her favorite spot. 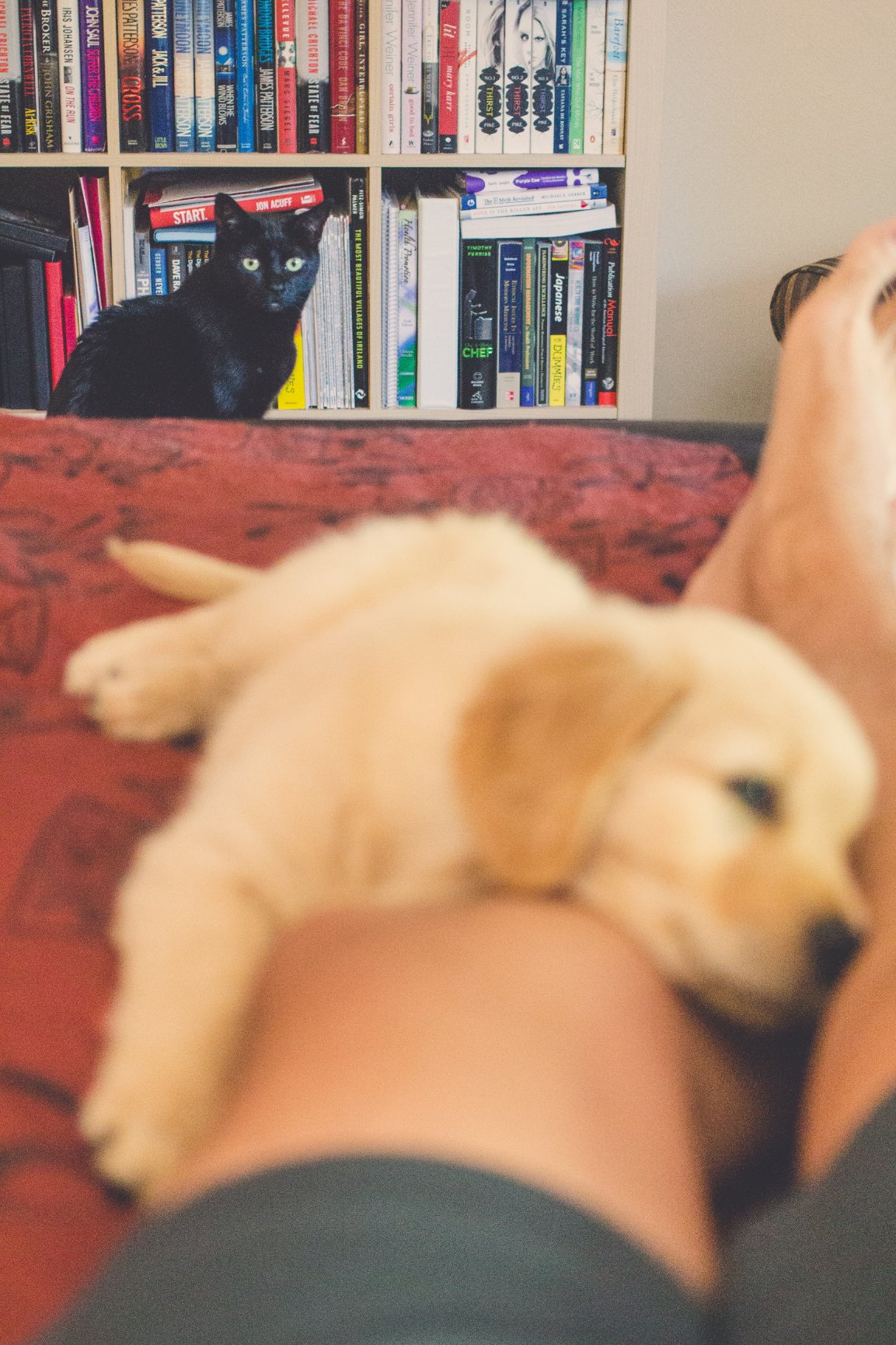 But he can be a good little guy. And he sure does love Grampo. 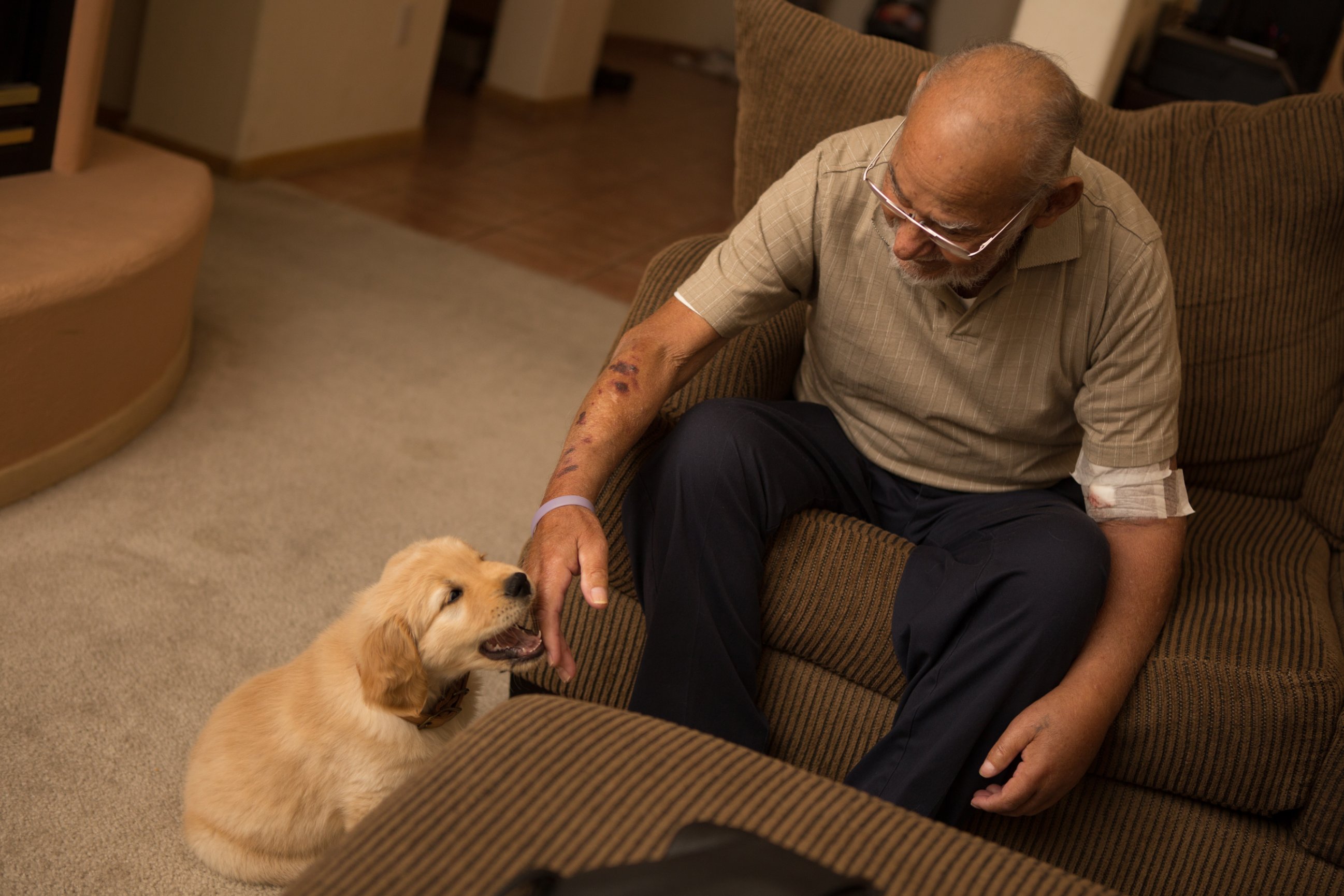 Maybe it's because I grew up in New Mexico, or maybe it's because I'm Spanish. Whatever the reason, My family (the Montoyas) have always had little yappy dogs. My grandfather currently has a shih-tzu. My uncle has a chihuahua named Mojo. My nana had a tiny little yappy poodle. As a kid, I had a pomeranian/chihuahua mix named Coyote. When Amy started throwing the idea around of getting a dog, I agreed, having only one condition. You can guess what it was.

I love our big boy. 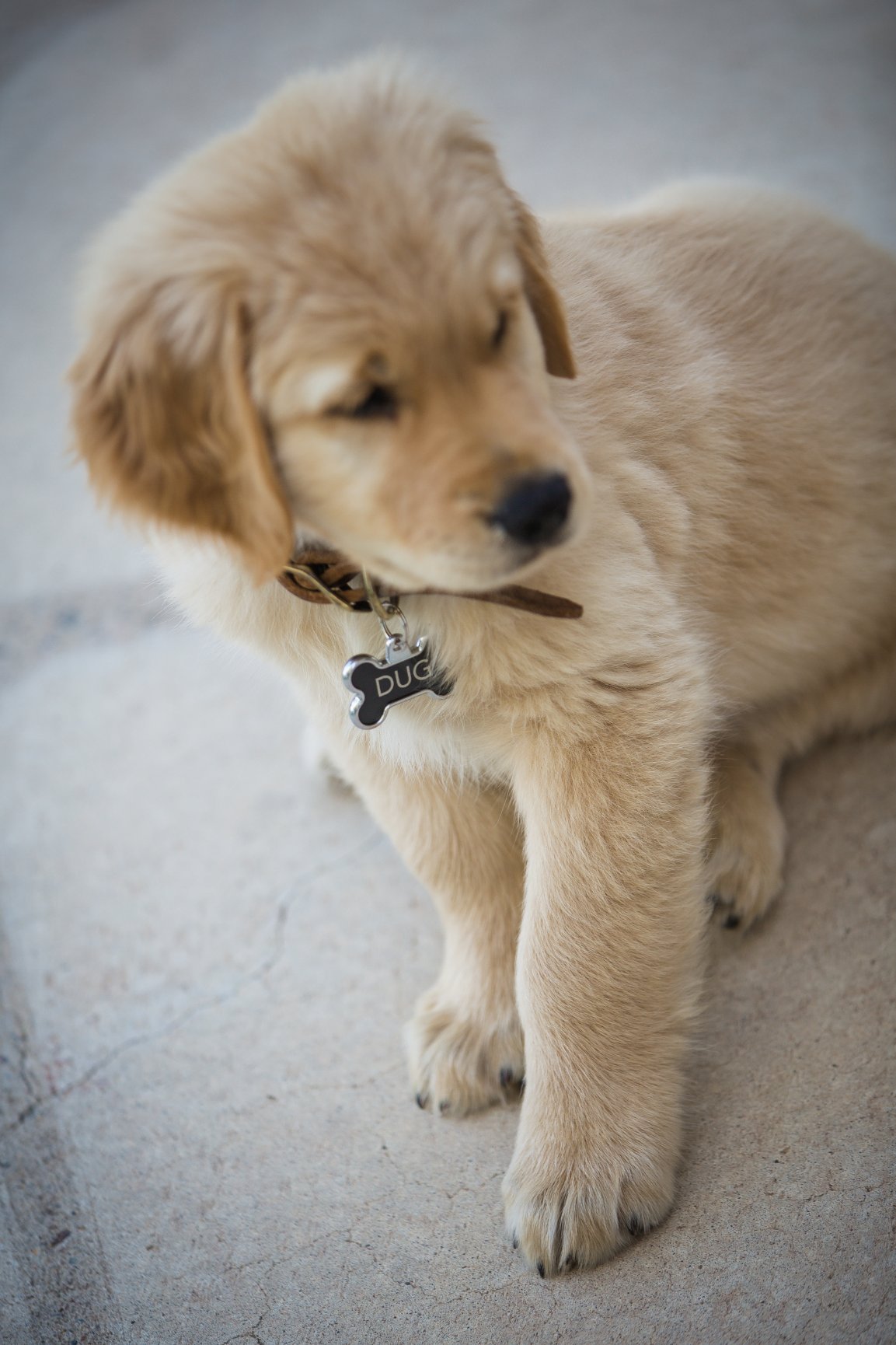 That's it for today, my friends. Thanks to Dug, I'm starting to wonder why I haven't had a dog of my own much, much sooner. It's like he was exactly what we needed to complete our little family.

From my family (including Dug) to yours, we wish you a great Friday and an amazing weekend!

Matt Blasing - I think I may do that, Lori. I'll have to really think this one through, but that seems pretty doable.

Lori - This is great! Now trying doing a blog written by Dug himself. A friend if mine did that and it was hilarious.

Matt Blasing - Thank you so much! He's gonna be a big boy for sure. We love having him as part of the family now. But the contsant barking is new. That's gotta stop...

Lisa - I love this blog. He is getting big and by the looks of his paws, he's going to get a lot bigger! I love the pictures of your family too Matt. Keep this up.. Great job.